At a time many urbanites around the world are being pushed to take to the bicycle amidst rising awareness about the environment and physical fitness, Du Fenyan's ambition extends to far, far more.

He has spent nearly two years riding through 22 countries across most of Africa and parts of Asia, enjoying an experience he will never forget.

When Du cycled on country roads in Ethiopia, his ears were bombarded with passionate greetings from local people who called him Bruce Lee, Jackie Chan or Jet Lee, the three most popular and recognizable martial art masters in the remote African countryside.

"They always asked questions like whether Bruce Lee was still alive as they just watched him on TV the day before," laughs the 27-year-old Du, whose face looks healthy and tanned from the hundreds of days he has spent biking in the open air.

These kinds of things happened so often that Du got used to them, and sometimes he even agreed to perform martial art for the locals. Perhaps he was the first kung fu guy to ride a bike across two continents.

For three years before embarking on his African journey in August 2011, the young rider learned one of the three main Chinese martial arts of the Wudang school, bagua zhang, which literally means "eight trigram palm". He also learned some shaolin kung fu as his hometown in Shandong province is known for that martial art.

Some men in Ethiopia wanted to challenge Du to kung fu, but after he took up his pose they changed their minds and just edged close enough to touch his arm before running off.

Du often won "fights" that way. He says it was the same when people tried to steal his belongings while he was on the road.

"I just needed to put on a good pose and stare into their eyes and they'd be scared and run away, whether they were just being friendly or were real thieves."

Du started his journey in 2011 from Nanning, a city in the Guangxi Zhuang autonomous region in South China. He rode from Thailand to India, then to the Middle East, and through Egypt into Africa in September last year.

The biggest impression Africa made on Du was that China was everywhere, from road construction sites to installing electrical equipment to daily necessities. Most Africans, he says, knew more about China than other countries and they always welcomed him warmly.

"I was invited to people's houses as an honored guest, sometimes to attend weddings or festival parties," he says.

In Sudan and Ethiopia, people called Du "China". To his surprise, they called all foreigners "China" because the Chinese workers helping them build roads and infrastructure projects were the only foreigners they had ever met.

Du's two-month stay in Ethiopia was the longest of his journey. He says in Ethiopia he went anywhere there was a road. He even learned a little Amharic, the local language. People there told him that China had helped them a great deal in building infrastructure, whereas some countries just want to take the country's resources without giving anything back.

And if Du had a problem or needed somewhere to sleep in an African city, he could easily turn for help to Chinese people working there.

"I loved meeting different people and seeing their various lifestyles," he says. "And I loved seeing beautiful scenes that some people may never have the chance to see."

Once when he was camping in the wild, he woke one morning to find many deep footprints and elephant droppings in front of his tent. He was also confronted while in bed by two wolfdogs staring at him.

He even rode across a wild national park in Namibia, which the natives dare not do because of the many beasts of prey there.

"When I recall all these experiences, I feel afraid. But I felt no fear at the time."

Watching movies on his laptop, collecting music from the places he has visited and posting pictures online were his only entertainment on the road.

The two-year journey cost Du about 40,000 yuan ($6,560). This included four flights and buying a camera. About 10,000 yuan came from donations from people he met on his journey.

One man he met in Djibouti gave him $400 and bought him several meals because, he said, people had done similar things for him when he was riding a bike through Europe.

Du was born into a farming family in Heze in Shangdong province. He is the second of five children. His family and friends strongly opposed his decision to resign from a Beijing-based package company where he worked as an IT engineer. His family's neighbors called him a loafer.

"I just wanted to realize my childhood dream while I was still young," Du says. "I didn't think too much about anything else."

During his two-year journey, Du rode about 3,500 kilometers, according to his stopwatch.

He chose to spend so much of that time in Africa for the simple reason that visas to most countries there are cheap and easy to obtain.

When he came back to China from his final African destination, Cape Town, what happened in those two years felt like a dream. But he realizes he made a spiritual fortune in Africa.

"No matter how desperate I might feel in the future, as long as I think of the joy of riding on all those roads, I will regain my energy," he says.

Du says more and more Chinese young people will explore the world by cycling. He met many while he was in Africa. And there is always the possibility that he will make another cycling journey one day.

Du Fengyan with children around Lake Malawi. The Chinese cyclist rode through 22 countries across most of Africa and parts of Asia. Provided to China Daily 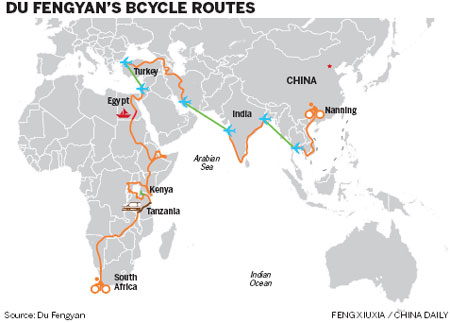 2 years, 22 countries，2 lucky charms and all on two wheels